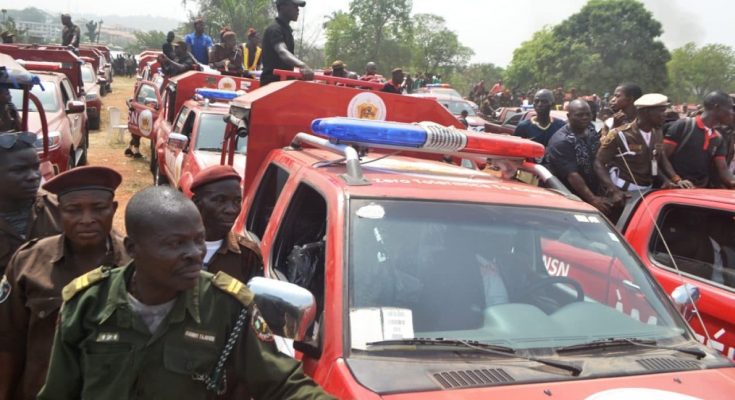 ‘Our operatives not involved in killing two residents’ – Osun Amotekun The South West Security Network Agency, Amotekun Osun has debunked news making the rounds that its operatives were reportedly involved in killing in Osogbo on Tuesday.

In a press statement signed by Yusuf Idowu, its spokesperson, the security agency called on residents to disregard any information alleging that men of Amotekun Osun killed two persons in Osogbo.

Idowu noted that it was a fabrication by the enemies of progress intended to dent the highly regarded image of Amotekun.

Revealing what transpired, the Amotekun Osun spokesperson stated that, “Around 10:00 hours on Tuesday June 14, 2022, during our normal routine patrol, which involved moving round from Ayetoro, Ogo-Oluwa, Alekuwodo, Ita-Olokan and Oluode market, on getting to Balogun Agoro area, we observed some people running.

“We stopped to check what was happening and later discovered that the people running were being chased by police personnel from the Anti-cultism unit after they engaged them in a violent altercation around the area.

“We joined the police in chasing them and we later arrested one of those creating havoc in the area who was promptly handed over to the police for further investigation and prosecution.

“Unfortunately, while on this important assignment, we received a distress call from our Field Commander’s residence that hoodlums in large number and motorcycles armed with dangerous weapons and led by one Lekan known as Emir, a notorious cultist who is on the wanted list of the Nigeria Police, was attempting to vandalise the building glasses front door and trying to open the front gate before they were repelled by our men.

“One of their motorcycle and the rider was apprehended while trying to escape and he will be handed over to the conventional security agency after the conclusion of our own investigations.”

Osun Amotekun while insisting that the attackers of the residence of its Field Commander’s residence will be brought to book, also appreciated the Osun State Police Command Criminal Investigation Department and the Department of State Security for their support and quick response to the incident.

It also assured that it will continue to protect the lives and property of people in the State. Continue Reading