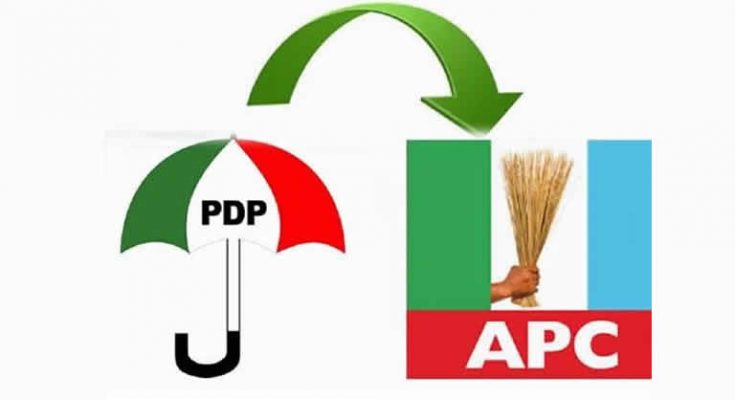 Over 5,000 PDP supporters defect to APC Recall that Governor Babagana Zulum and the state Chairman of the APC, Hon Ali Bukar Dalori among other dignitaries were in Biu for the past three days, where they commissioned various projects including 60 classroom blocks constructed for the community School for Higher Islamic Studies, Mega School in Buratai, foundation laying for the construction of Vocational and Skills acquisition centre and disbursement of over N200 million empowerment initiatives in the Council area.

The ex-chieftain of PDP, Alhaji Haruna Garba who led the new entrants, including women and youths leaders from different wards within the local government area into the APC, attributed their decision to the good and purpose-driven leadership style of Gov. Zulum.

He cited that Governor Zulum has within the last three and half years restored peace and harmony, and provided needed dividends of democracy with educational transformation among other achievements too numerous to mention.

He appealed to the present administration to carry them along in the discharge of policies and programmes in moving Borno to greater heights.

Most of the defectors in an interview with Journalists said the efforts of the present administration in the provision of potable water, construction of classroom blocks, poverty alleviation materials and improvement in the health care delivery services in the area convinced them to join the APC.

They said their decision to join the APC was to appreciate the governor’s people-oriented policies toward improving the well-being of the people.

He urged the new defectors to rally around the present administration in it’s quest to reposition Borno and regain its lost glory.

He assured them that the government under his leadership will give equal treatment in providing the needed dividends of democracy at all levels.

”With the calibre of defectors received in Biu LGA, the APC in Borno had been further fortified and this means that our chances in 2023 are getting brighter by giving our block votes to our Presidential Candidate, Ahmed Hola Tinubu, his running mate and Vice-Presidential Candidate, Senator Kashim Shettima, and all other candidates contesting on our party’s platform to ensure victory”, the governor added.

The Chairman of APC in Borno state, Ali Dalori while assisting the governor and presenting the new APC flags and membership cards to the new entrants, lauded Zulum for delivering on his mandate to transform the state.

He said: ”This is why APC has become a party that everyone wants to join and we will keep receiving new members”. He stated. Continue Reading