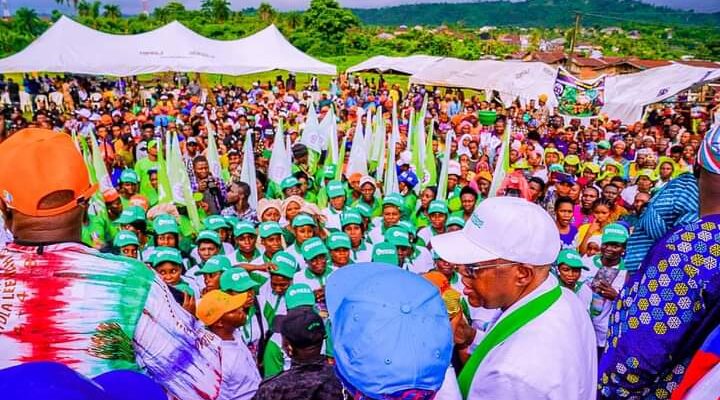 The re-election bid of Osun Governor, Adegboyega Oyetola received a boost on Tuesday as traditional rulers in Atakumosa East and Atakumosa-West Local Government Areas of the State, declared their support for him ahead of the July 16 guber poll. The monarchs who hinged their support for Oyetola on his performance in office, described him as a promise keeper, and lauded him for fulfilling his promises and surpassing the expectations of the people. They assured that the towns and villages in the local government areas would vote massively for Oyetola, saying that the forthcoming election is an examination that must be passed with distinction. The royal fathers made the remarks when the Campaign trail of the governor moved to Atakumosa East and West Local Government Areas of the State. Speaking on behalf of the traditional rulers across Atakumosa East Local Government, the Chairman of the Council of Traditional Rulers, Alamo of Aiyegbaju, Oba Abideen Adeyemi, said discerning minds will know that Oyetola’s re-election is central to the actualisation of Yoruba presidency in 2023. Oba Abideen said: “I thank God and the governor for showing favourable disposition to Atakumosa East. Thank you for facilitating the rise of our sons to prominence and political relevance. What is more surprising is that the breed of political leaders we have here are those who have played politics with decorum just like the governor. “We have the assurance that by the evening of July 16, we will celebrate. It is our turn to fulfill our side of the bargain by voting for the candidate who has done what we asked and exceeded our expectations. This election is an examination that we must pass with distinction. “Discerning minds will know that victory for Oyetola at the poll is not only for him, but also a preparation for the actualisation of Yoruba Presidency. Osun is very strategic and critical to that project and we must not miss the mark. “Those who truly believe that the presidency belongs to the Yoruba race will support Oyetola because he is the pilot project for Asiwaju’s emergence. Anyone who goes against this order certainly doesn’t understand what is at stake”, Oba Abideen said. Coroborating his stance, Oloja of Ibodi, Oba Omisade Agboluaje said the emergence of Asiwaju Bola Ahmed Tinubu as the flag-bearer of the ruling party signaled the turn of Yoruba race to produce Nigeria‘s next President. They express their resolve to mobilise their subjects to get Oyetola reelected. While addressing the crowd at the various campaign venues, Oyetola described his administration as one that loves the masses, adding that his interventions across every sector lend credence to his government’s people-centeredness. Oyetola, who said he is in government to serve the people, assured that more developmental interventions will be carried out if reelected for a second term in office. “Our people are of great value to us and that explains why our interventions have continued to revolve around your needs. This is a government established by God to serve the people with the endowments He has given us. “Please support us so that we can consolidate on what we started and even do more. We have concrete plans and we are never shy to openly declare our plans. We are not scampering for ideas or seeking to learn on the job. That will mean toying with the lives of the good people of Osun. We are equipped for this sacred duty, we are not neophyte. We trust that your support will earn us the victory”, Oyetola said. In their separate remarks, the Director-General of the Campaign Council, Senator Surajudeen Ajibola Basiru and the Chairman of the All Progressives Congress, Prince Gboyega Famodun, urged the people of Atakumosa East and West to vote massively for Oyetola, saying he has turned the Areas to the cynosure of Osun and Nigeria. According to them, Atakumosa hosts Nigeria‘s only large-scale commercial gold project, which was facilitated by Oyetola as part of efforts to diversify the state‘s economy. Continue Reading