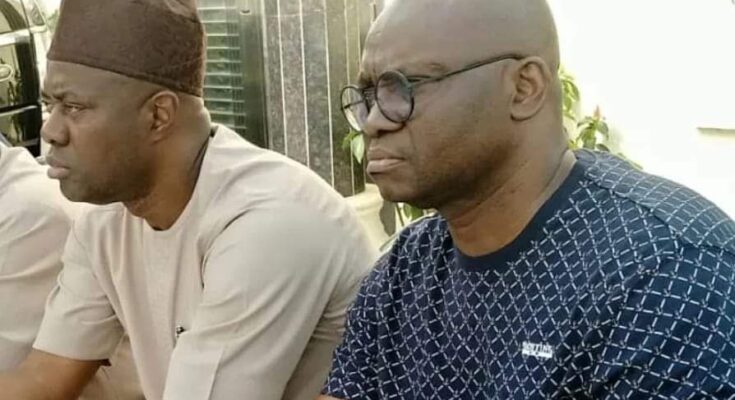 Wike and those sympathetic to his cause had demanded Ayu’s resignation as a precondition for peace.

But indications emerged, yesterday, that the leaders of the PDP in the South-West are meeting in Ibadan, Oyo State to push for the zone in producing the National Chairman of the party.

The meeting, according to multiple party sources, is to discuss the future of the PDP in the South West and Atiku’s visit to Lagos and Oyo states.

While a source told Nationnewslead that Makinde and other party leaders may boycott Atiku’s visit, another source said the leaders are insisting on Ayu’s resignation to pave way for the South West to produce the next national chairman of the party.

The source said: “Atiku is coming today to Lagos and he is going to Ibadan on Wednesday, the plan is to boycott meeting with him. They want to be spoilers and I heard they are tilting towards Peter Obi. From what I know, former President Olusegun Obasanjo is the one guiding the Wike team to throw their weight behind the Presidential candidate of the Labour Party, LP, Mr Peter Obi in 2023.”

Another source told Nationnewslead that Makinde and others are insisting on producing Ayu’s replacement.

The source, privy to the reconciliation committee, said: “Makinde’s position is clear and that is, the South West wants the chairmanship of the party. It is not as if the South West wants it alone, it is what is fair and just and that has been our position in the Wike team. It is not about Wike alone, so many people feel that is what should happen.”

On how far the reconciliation committee has gone, the source said: “It is in Atiku’s hands, the Wike team has laid its card on the table that what is fair and equitable is that once the presidential candidate comes from one zone, it is for the chairmanship to come from another, particularly when there was an understanding.

Meanwhile, Nationnewslead gathered in Abuja, that the Wike camp is yet to give a clear signal as to when it would be available to receive emissaries from the party leadership.

A source in the camp, who confided in Nationnewslead, said: “As we speak, no date has been fixed for the meeting. A number of our people have travelled for one engagement or another outside the country.

“Besides, our demands are with the other side while we are not opposed to any genuine effort towards peace; we are no longer available to be deceived.”

Ayu last week solicited the support of the new Chairman of the PDP Board of Trustees, Sen. Adolphus Wabara and other party leaders to reach out to Wike for an amicable settlement of a dispute which has its origin in the party’s presidential primary and the selection of Delta State Governor, Ifeanyi Okowa the presidential running mate.

Ayu has been under pressure in the last few months, with demands for his resignation coming from different quarters, especially the camp of Nyesom Wike, governor of Rivers state.

Amid the calls for his resignation, the National Executive Committee, NEC, of the party recently passed a confidence vote on him. Continue Reading