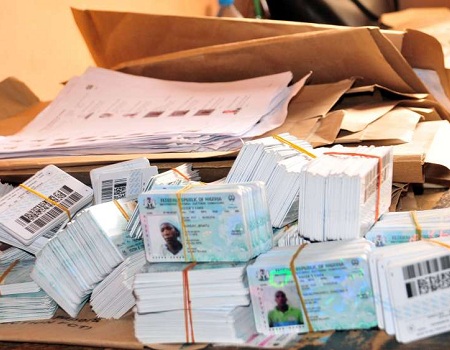 AMID the alarm raised by the Independent National Electoral Commission (INEC) of some politicians buying Permanent Voter Cards (PVCs) ahead 2023 elections, chieftains of political parties have offered more reasons why such individuals may be indulging in the unholy practice of procuring the item.

INEC National Commissioner, Mohammed Haruna, had, on Monday, at an event in Abuja, declared that politicians had not relented in buying PVCs from prospective voters.

The commission has, however, continued to maintain that with the introduction of its Bimodal Voters Identification System (BVAS), PVC not obtained by the real owner could not be used during elections.

According to INEC, the new technology also captures the facial appearance of the real owner of the voter cards.

Presidential candidate of the Action Democratic Party (ADP), who doubles as the chairman of the Inter-Party Advisory Council (IPAC), Sani Yagbagi told the Nigerian Tribune that those buying voter cards might have been recruited by unscrupulous politicians who wanted to disenfrachise voters in areas where their opponents are strong.

He, however, corroborated the INEC on the reliability of the BVAS.

He said: “No, it is not that the cards are falling into wrong hands; what happened is that the cards are acquired by bonafide voters. But the unscrupulous elements went round to buy those cards. What they want to use it for, I don’t know because with the BVAS, they are useless to you. Perhaps, one of the reasons may be if you are popular in this area, it means nobody will come out to vote for you because the cards are already taking away. So, they will ensure that your supporters are handicapped and cannot vote for you. Otherwise, if they intend to use it at the polling unit, it is not possible.

“Meanwhile, PDP, which described the alarm raised by INEC that some politicians were buying up voter cards as worrisome, said it posed a threat to democracy if indeed it was true. National Publicity Secretary of the party, Honourable Debo Ologunagba charged President Muhammadu Buhari and the security services to ensure that the claim was thoroughly investigated and those found culpable apprehended and prosecuted.

“The alarm raised by INEC should not be taken lightly because within the last couple of weeks, Nigerians have seen an upsurge in the desperate tactics by the ruling All Progressives Congress, to grab and retain power by all means, including the purchase of PVCs from gullible people.

“The party has weaponised poverty, which it intends to use to cow Nigerians into doing its bidding. Nigerians are also aware that it was the same APC candidate who refused to sign the Peace Accord.

“The APC and its candidate have also voiced their opposition to the use of BVAS which is an innovation by INEC to improve the quality of our electoral process.

“With all of these tell-tale signs of desperation from the outgoing ruling party, need Nigerians look any further than the APC?

“While we await a thorough investigation to unravel the extent to which APCs desperation has led it into seeking to criminally manipulate our electoral process to sub- vert the will of Nigerians, we implore our security agencies and President Muhammadu Buhari, to remain faithful to their promise to bequeath a credible, free and fair election come 2023.

“We appeal to Nigerians to resist the temptation of selling either their PVCs or their votes because these are the only weapons they have to remove an incompetent party and or government from power,” he claimed.

National Publicity Secretary of the ruling All Progressives Congress (APC), Felix Morka, in a telephone interview with the Nigerian Tribune urged the INEC to be vigilant and ensure that offenders are prosecuted.

He accused the PDP of raising false allegations of the ruling party’s involvement in the PVCs procurement racket.

He said: “The All Progressives Congress (APC) stands resolutely against any and all forms of illegality and electoral malpractice, including buying of PVCs.

“We stand shoulder to shoulder with the Independent National Electoral Commission (INEC) in its resolve to prosecute and hold perpetrators accountable, irrespective of status or political affiliation.

“Statements attributed to the spokesman of the PDP suggesting that APC may be involved in purchasing PVCs are yet more signs of chronic diarrhoea of the mouth, spewing empty and senseless allegations that only betrays that Party’s hopelessness and lack of electoral ground game as visibly demonstrated in the miserable campaign outing in Jos by their presidential candidate.

“As we continue our hard work to earn the votes of Nigerians in next year’s general election, the PDP is welcome to continue their idle indulgence in peddling lies and falsehood as choice electoral strategy.”

A chieftain of the All Progressives Grand Alliance, (APGA), Chief Chekwas Okorie would not want to be joined in the debate of why politicians are buying voters cards. Okorie expressed strong reservations on the efficiency of the BVAS, which INEC has maintained would stop electoral heists through the use of voter cards by proxy.

He said: “Most Nigerians will be pleased to know that their votes will count and that the results of the elections will be released promptly without any form of manipulation, whether physically or technologically.

“INEC has a responsibility to ensure that the outcome of the 2023 general election is devoid of any form of suspicion and doubt.

“As much as the BVAS as a machine may have been designed to function efficiently but the trajectory of INEC officials casts serious doubts about the sincerity of those who are going to operate the machine and that is where the problem resides.

“Evidence abounds that makes the unwary public not to repose much confidence in the sincerity and uprightness of most of the staff of the commission.

“The spate of cancellation of INEC supervised party primaries across the states by the courts is worrisome and a clear indictment of INEC that published the names of the candidates whose primaries were adjudged by the commission to have met the minimum requirements of the electoral law, only to be set aside by the courts.”

Our neutrality, integrity not in doubt —INEC

However, INEC has said it was not bothered about insinuations of connivance with a certain political party to undermine the electoral process. Rotimi Oyekanmi, Chief Press Secretary to Chairman of INEC, Professor Mahmood Yakubu, told the Nigerian Tribune that politicians purchasing PVCs with the aim of using it to manipulate elections were in a wild goose chase.

He explained that the experience of the commission with the Smart Card Readers, which allowed use of Incident Forms with the attendant manipulation, informed the deployment of the new technology being showcased.

He claimed that politicians, who took advantage of the Incident Form in previous elections, were in the vanguard of demonising the BVAS.

He assured Nigerians that the commission would not surrender itself to be used to achieve sinister motive by any political party.

He said: “Supporters of the competing presidential candidates for the 2023 general election will help their respective candidates better if they spend the next two months before the polls to rigorously convince and mobilise registered voters across the length and breadth of Nigeria to vote for their preferred candidates than to continue smearing the reputation of the Independent National Electoral Commission (INEC) with baseless conspiracy theories. It will not work.

“The commission is not a political party. INEC does not have a preferred candidate. We have been preparing for the 2023 polls since the conclusion of the 2019 general elections, perfecting existing tools and introducing other innovations.

“These innovations are designed to ensure the integrity of the process and make it impossible for any politician or INEC Staff to compromise an election in favour of any candidate.

“Therefore, the insinuation that some politicians are buying Permanent Voters’ Cards (PVCs) to rig the 2023 general election is baseless because INEC has moved very far away from the period when the Incident Form could be used for that purpose on Election Day.

“Recall that for the 2015 and 2019 general election, the commission used the Smart Card Reader (SCR) to authenticate the PVC and accredit the voter on Election Day via his or her fingerprint and allowed the use of the Incident Form.

“Unfortunately, some politicians took advantage of this waiver, bought PVCs, gave them out to their acquired voters and sent them to polling units to vote, using the Incident Form.

“This was one of the reasons the commission introduced the Bimodal Voter Accreditation System (BVAS) for the 2023 General Election.

“The BVAS has one significant advantage over the SCR: it accredits through fingerprint and facial recognition. So, if your fingerprint fails, certainly your face will not fail.

“However, if the BVAS rejects your face, it means you are not an authentic voter and will not be allowed to vote. You will be asked to leave the polling station im- mediately. You could also be arrested for impersonation.

“Besides, to engender transparency, the commission introduced the INEC Result Viewing (IReV) portal in 2020, where individual polling unit results are uploaded on Election Day.

“We used the portal for the Edo, Ondo, Ekiti Osun, and Anambra off-season governorship elections. At the end of voting on Election Day, after the ballots have been counted and results announced, the presiding officer will take a picture of the result sheet – Form EC8A – and upload the same to the IReV portal before departing to the collation centre. Party agents and voters will witness this activity that is backed by law.

“So, for this 2023 election, it is one genuine voter, one vote. No PVC, no voting. No accreditation by BVAS, no voting. If you try to make trouble at the polling unit because the BVAS rejects your fingerprint and face, the security agents around will arrest and prosecute you, according to the provisions of the Electoral Act 2022.

“Therefore, this general election will not be business as usual. If there are politicians out there still going about purchasing PVCs to use pseudo-voters on Election Day, they will not only be disappointed but arrested and prosecuted.”