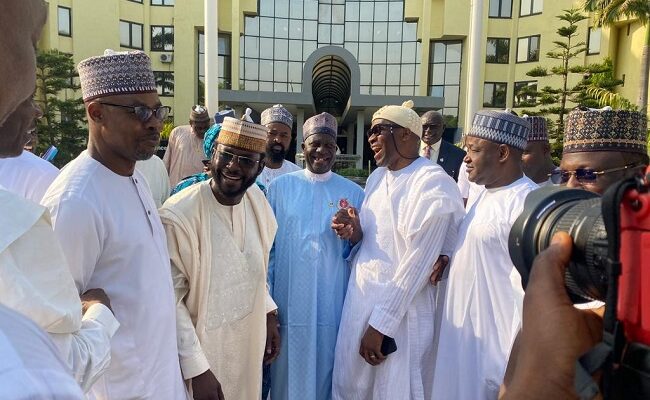 The House of Representatives Committee on National Security and Intelligence has commended the Department of State Services (DSS) for its role in combating crime through the provision of effective intelligence services.

Chairman, House Committee on National Security and Intelligence, Hon. Sha’aban Sharada gave the commendation during an oversight function at the DSS headquarters in Abuja.

The lawmaker observed incidences of kidnapping, banditry and terrorism have been reduced in the country because of the DSS’ approach to delivering its statutory mandate.

While commending the DSS Director-General, Yusuf Bichi’s resolve to transform the service in the bid to attain prominence in protecting Nigerians, Sharada averred that the service was informed about the committee’s interest to carry out the oversight during your recent appearance for budget defence.

“The objective of the exercise is to access or evaluate your performance in implementing the 2022 budget and it is also carried out to discharge its constitutional mandate of ensuring efficient service delivery through judicious public expenditure management.

“On behalf of our committee, it is my pleasure to express my appreciation for working with your organisation cordially for over three years.

“I want to use this medium to convey my gratitude to the management of the State Security Service under the leadership of Yusuf Bichi, a man of honour, vision and integrity.

“This cherished, but rare attitude in many leaders may not be unconnected with his success in transforming the service to attain prominence in the protection of lives and property in Nigeria.

“It is significant to note that the level of crime, especially kidnapping, banditry and terrorism has reduced considerably despite approaching the 2023 general election due to his inclusive approach of utilising stakeholders’ input in the delivery of its statutory mandate of the service,” he noted.

In his remarks, Deputy Chairman, House Committee on National Security & Intelligence, Hon. Adejoro Adeogun applauded the existing cordial relationship between the Committee and the Service as a result of the leadership provided by the Director-General.

“It is because of you that we have a fantastic relationship with the service. He has been a fantastic person,” Adeogun noted.

While responding, Director-General, Yusuf Bichi assured that the service will continue to spend its budgetary allocation judiciously, adding that changes would be seen when next the lawmakers visit the headquarters.

He also commended the committee for creating time to carry out a physical inspection of various capital projects for which funds were appropriated in the 2022 Appropriation Act.

“All you have seen wouldn’t have been possible without your support. It is a promise that whatever is appropriated to us, we will use it judiciously.

“I have to also register my appreciation to the leadership of the National Assembly for their tireless support of the service.

“All that you have seen would not have been possible without your backing and support and as such we thank you immensely.

“I want to promise you that whatever amount of money you appropriated to the service will be spent judiciously and next time you come, you will definitely see a lot of changes,” the DSS helmsman assured.