Home Politics Sanwo-Olu picks his PVC, charges Lagosians to get theirs 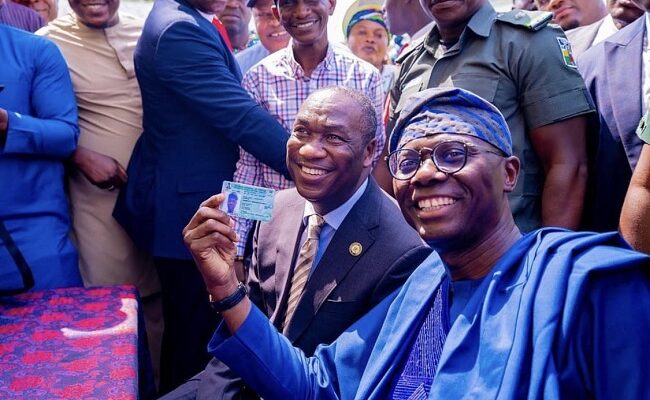 Sanwo-Olu picks his PVC, charges Lagosians to get theirs

Lagos State Governor, Mr Babajide Sanwo-Olu, has appealed to the residents of the state, who are of voting age to pick up their Permanent Voter Cards (PVCs), from the various Independent National Electoral Commission (INEC) offices in their localities.

Governor Sanwo-Olu made the appeal on Monday when he stopped by at the Independent National Electoral Commission (INEC) office in the Sura area of Lagos Island Local Government Area to pick up his reprinted PVC alongside the Deputy Governor, Dr. Obafemi Hamzat, and some of his cabinet members.

Sanwo-Olu, who is seeking re-election on the platform of the ruling All Progressives Congress (APC), a few months ago redesignated his location and updated his details, having moved his polling unit from Ikoyi to Lagos Island, ahead of next year’s governorship poll.

He reminded the people that it was only when they collect their PVCs that they would be able to exercise their franchise during next year’s general elections.

“Today, INEC officially started the collection of PVCs and because I did a redesignation of my address of where I was and where I am now, I had to move my polling unit.

“I am here to demonstrate to all our citizens that I have complied. I have come to pick up my reprinted Voter’s Card and I want to enjoin everyone to use this opportunity to go out and pick their PVCs.

“I have collected mine and you can see that I am at the INEC office here, and it is peaceful. Within two minutes, they sorted it out and I signed to collect my own. So my advice is for all of us that still have our PVCs uncollected to please come out and do the rightful thing.

“It is only with this that you can participate in next year’s election. I wish all of us the very best and as we go into this exercise, I hope that it is something that is worth it very seriously as another civic responsibility,” the governor said.

Governor Sanwo-Olu expressed confidence that Lagosians would do the right thing by re-electing him during the governorship poll based on his administration’s performance during the first term.

“We will continue to do our very best to ensure that we earn the trust and the commitment of our people,” he said.