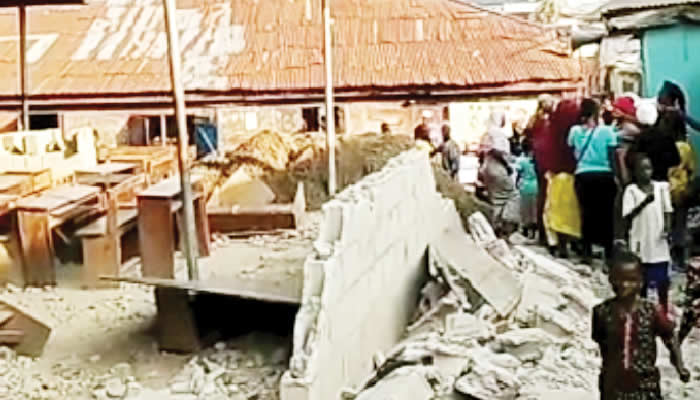 Two children, Samat Saheed and a yet-to-be-identified girl, have lost their lives when the fence of a school, Covenant Point Academy, collapsed on them at Ajose Street, in the Amukoko area of Lagos State.

Nationnewslead gathered that the nine-year-old girl was walking past the front of the school to link her destination in the area while three-year-old Samat was playing around the fence of the school, close to his mother’s shop when the fence collapsed suddenly on them.

Our correspondent gathered that as the fence caved in on the minors, its impact crushed Samat’s head, killing him instantly, while the nine-year-old girl lost consciousness and reportedly died shortly after the incident.

Speaking with our correspondent, an eyewitness, Ganiyu Ayeloja, said residents, who were traumatised over the incident, informed the police, adding that the owner of the school had been arrested.

He said, “The police came around and they arrested the owner of the school building. The building has no pillars, they just stacked blocks. The building was not well structured at all; there was no wiring, no pillar, and nothing to hold the building together that’s why it fell easily.

“It is unfortunate that the two children were around that area when it collapsed. One of the children’s parents had a shop close to the school building, that was why he was there and his parents were immediately alerted.

“The Oba of Ijora land was called to the incident yesterday and everyone is sympathising with the deceased families. People from the Lagos State Building Control Agency came to inspect the building this morning (Sunday).”

Another resident, Akinniyi Akinwale, said the nine-year-old girl was running errands when the tragic incident befell her, adding that when she didn’t return home, her parents started searching for her but were informed that the fence of the building claimed her life.

He said, “The wall in front of the school just fell on both of them. The girl who died was sent on an errand to that street, so no one knew her parents there but she was taken to the hospital after the incident and it wasn’t until night time when her parents started looking for her that they were informed of her death.”

A source told our correspondent that Samat was buried immediately after the incident.

The Head, Public Affairs, Lagos State Building Control Agency, Adetayo Asagba, when contacted, said she was not aware of the incident.

The Lagos State Territorial Coordinator, National Emergency Management Agency, Ibrahim Farinloye, also said he was not aware of the incident.

He said, “Two children died, the owner of the building has been arrested.”

Reacting to the development, the immediate Past President of the Nigerian Institute of Building, Kunle Awobodu, said blocks used to construct buildings nowadays were very weak and substandard as he urged site engineers, developers, among others to desist from using substandard materials.

He said, “This is quite unfortunate. Those of us in the construction industry have laid emphasis on the threat of natural force or pressure on buildings, to withstand such natural pressure especially in an area that is exposed to strong winds, there is a need to introduce columns.

“Pillars are referred to as reinforced columns to enable fences to withstand the natural force being generated by the wind. Constructing coping is necessary on top of these fences so that persistent rainfall does not have an extreme impact on the stability of the fence.

“Many of the blocks used to construct buildings nowadays are very weak and substandard; they are usually six inches and 150ml in thickness which is unable to withstand wind pressure that makes it important for all of us to be more vigilant.”

Awobodu said the tragedy that claimed the lives of the minors was a clarion call to everyone not to underestimate the standard required for a fence, and to shun using substandard materials when building.

“What has happened shows that the stability of the fence is crucial to avoid calamities of this nature. This is not the first time a fence has collapsed and taken lives, so urgent attention should be drawn to it.

“It’s a warning for landlords, developers and building owners to construct fences that will adequately protect the habitat and property,” Awobodu said.

Nationnewslead had reported a series of building and structural collapses that claimed the lives of residents in the state.

On August 21, 2022, two children died in a building collapse at Adeleye Street, Lady Lark, Bariga area of the state.

Also, on September 5, 2022, a seven-storey building under construction collapsed at Oba Idowu Oniru Street, in the Lekki area of the state and killed six persons.

However, amid expert criticisms of developers, among others, for using substandard materials and not conforming to standard building regulations in the state, a recent statement by the state Commissioner for Information and Strategy, Gbenga Omotoso, confirmed the resignation of the Commissioner for Physical Planning and Urban Development, Dr Idris Salako.

Omotoso noted that Salako’s resignation was part of Governor Babajide Sanwo-Olu’s efforts to restructure the Ministry of Physical Planning and Urban Development and its agencies. Continue Reading