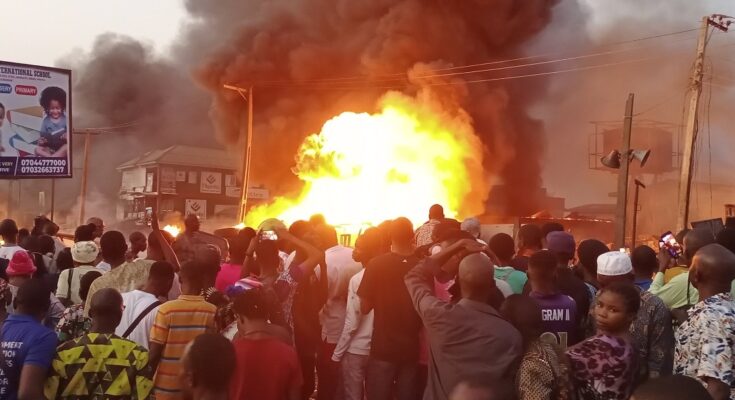 A  filling station, shops and residential buildings went up in flames on Thursday evening as a fuel tanker skidded off the road and caught fire at Apata in Ido Local Government Area of Oyo State.

Also, some vehicles that were parked at the roadside were affected but it could not be ascertained the full extent of damage as of the time of this report.

The vehicle, according to an eyewitness, was coming from Apata loading depot when the incident happened.

It was gathered that the vehicle lost control and rammed into some shops located along the roadside, spilled its contents and eventually caught fire.

According to him, “I am at the scene of the incident. We are trying to handle the situation. Our men are on ground to prevent further destruction. The situation is under control.”

Meanwhile, the Oyo State Road Transport Management Authority (OYRTMA) has advised motorists to make use of alternatives route to avert gridlocks pending the time that normalcy will return at the spot of Apata fire incident

This was contained in an emergency bulletin released by the Executive Chairman of the Authority, Akin Fagbemi, when the event occurred on Thursday.