Home Politics The Aristocracy of Talent: How Meritocracy Made the Modern World, by Adrian Wooldridge 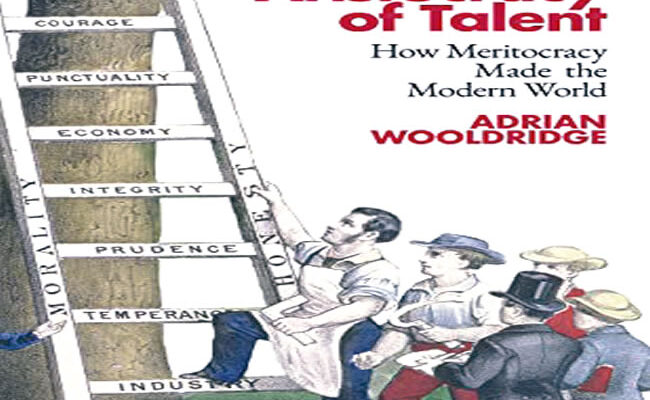 The Aristocracy of Talent: How Meritocracy Made the Modern World, by Adrian Wooldridge

The great virtue of The Aristocracy of Talent: How Meritocracy Made the Modern World, by longtime Economist editor and writer Adrian Wooldridge, is that while acknowledging the harsh truths of these critiques, it forces us to ponder the next question only tepidly addressed by others on this beat: If not meritocracy, then what? How should societies allocate status and the power to make the big decisions?

Scour Wooldridge’s expansive history of the conundrum, and you’ll be hard-pressed to find satisfying alternatives. In fact, from his telling, you might conclude that raw evolutionary psychology rather than studied political science or ethics best explains how most societies have operated. Families and clans, not individuals, were “the basic unit of society,” he writes. Sons inherited land and titles, daughters were bartered for more, and both passed their unearned privileges onto their own children regardless of their progeny’s character, intelligence, or interest in doing certain jobs. Likewise, serfs grew their superiors’ food, and servants dressed their masters in silk breeches for no reason other than that they were born to do so. If a peasant was blessed with Einstein’s brains or Lincoln’s political wisdom, it would make no difference in his or her life path; “tillers tilled and thatchers thatched,” as Wooldridge writes. No doubt the hoi polloi grumbled about their masters, but the arrangement was widely accepted as natural and just. It was individual ambition that represented a danger to what was thought to be a God-given social order.

Of course, the powers-that-were had every reason to advance the idea that inherited privilege was divinely ordained—but the truth is, for many centuries favoring kin was about the only game around. Plato was the first to imagine a system that would give power to those more worthy. The guardians of his Republic would be “men of gold”: those with natural talents, pedigree be damned. Notably, he believed the family was the biggest threat to the just polity; kin would always embrace kin. To short-circuit this stubborn fact, he proposed taking future guardians of each generation away from their parents in order to prepare them for leadership through intensive physical, intellectual, and philosophical training. (Plato doesn’t specify how he would locate the prodigies.)

The only other proto-meritocratic social order came from Asia. As early as the tenth century, the Chinese developed their famous exam system that, with many modifications, continues to sort the wheat from the chaff today. A grueling, multiyear preparation, it allowed farmer’s sons the chance to escape the dead-end bleakness of village life and become “mandarins” in the Forbidden City. Still, the emperor inherited his position.

In other parts of the world, a few exceptional low-born strivers could bypass the ancient barriers of entrenched hierarchy. England had an unofficial system of “sponsored social mobility,” in which a lord or church worthy would take notice of a clever plebian and mentor him to prominence. Cardinal Wolsey, the son of a wool seller, groomed Thomas Cromwell, who later became Henry VIII’s consigliere and fixer—a stunning rise for the son of a blacksmith. Noblemen lent support to talented artists and thinkers from undistinguished backgrounds. The Duke of Buccleuch was patron to the philosopher Adam Smith; ironically, his protégé was part of the Scottish Enlightenment, which would weaken the logic of inherited nobility that had given the Duke his riches. Wooldridge speculates that the emergence of larger and more complex states also challenged the ancien regime as states found themselves in need of more capable bureaucrats than a pampered, inbred aristocracy could produce. After all, kings and dukes needed shrewd minions to administer and collect taxes to support their palaces and wars.

Understood in the context of this tenacious history, meritocracy was a genuinely radical idea. It took bloody revolutions, religious wars, and centuries of dispute to undo the old system of lineage and shift toward modern thinking about merit. The Protestant Reformation played a role in this process by releasing individual conscience from the all-powerful word of priests and kings. Calvinism moved individual hard work to the center of moral and religious life. Enlightenment philosophers harped on the corruption and mediocrity of titled aristocrats of their day. The philosophes began the nature–nurture debate that continues today: were the talented just born that way—“natural aristocrats”—or were their gifts the result of training and education? In either case, the individual was to be judged and rewarded according to his merit, not family ties.

Whatever its potential advantages, the advent of IQ testing also signaled a coarsening of meritocratic ideals. From Plato on, merit had a moral as well as an intellectual dimension. When the founders spoke of talent, it was frequently accompanied by the word “virtue”; the Victorians emphasized the “duty” required of their elites. Public service remained an elite profession well into the twentieth century. But by World War II, testing enthusiasm and an increasingly technocratic, bureaucratic, and globalized economy left the moral dimension homeless and built up the prestige of raw mental dexterity. This technological hubris has given us a society dominated by Silicon Valley titans and Ivy League royalty.