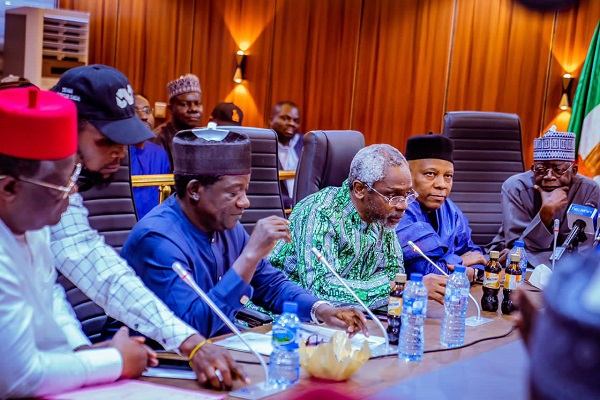 He promised to turn Nigeria into a progressive, highly developed and prosperous country worthy of pride.

He gave the assurance at the party’s national secretariat in Abuja during a meeting with the National Working Committee (NWC) ahead of the kickoff of the presidential campaign.

Tinubu, who held a strategy meeting with the party leadership, also promised to ensure the full democratisation of the country.

He said: “I admit that democracy is challenging, very hard and difficult a system to manage.

“We have seen challenges left and right outside the international sphere of politics, but we are determined to ensure that we democratise Nigeria fully and remain a beacon of democracy as the largest nation of the black race in the world.”

Speaking with reporters after the meeting, Tinubu assured Nigerians of a new dawn of rapid development and progress.

He said: “It is a new horizon and we assure that every Nigerian will benefit and I am very sure that there will be a refreshing and we will continue to develop rapidly.”

Tinubu promised to unveil his agenda in line with the Independent National Electoral Commission (INEC) timetable.

He said: “We have to comply with INEC and regulations regarding the elections. When we finish that, we will unveil to you those things that we have in plan for the country.

On his opponents, he said: “We are not threatened. We are committed and we are very proud of ourselves. We are orderly; we are committed to democratic principles and values; we are not bickering in any way and you know that.

He dispelled the rumour of a cold war between him and the national chairman, Senator Abdullahi Adamu.

Tinubu said: “I read in some papers about a disagreement between myself and the chairman and that was a very big lie. They didn’t know that we have come a long way.

“The big masquerade dance not in the cage, but the market square. And that is what Adamu is to me.

“Full of wisdom, we were governors together, before God put us together on this project again. He is going to deliver as the chairman of the party for me to become the president of Nigeria. And I am very confident of that.”

Tinubu added: “They can say whatever they want to say, throw all the jabs that they want. We are a party strongly determined to fulfil our dreams of turning Nigeria into a very progressive, highly developed, prosperous country.”

On the Presidential Campaign Council, the flag bearer appealed for the understanding of party stalwarts, especially the NWC members, who may not make the council.

He said there will be many responsibilities to be undertaken by members during the campaign.

Tinubu said: “What we came here today to do is to discuss the campaign, which is a few days away.

“When INEC will lift the ban, how do we work out the details, work together, implement all we have been saying, who are the members of the campaign council, who will not be members?

“I beg you not to be angry if you are left out because we are going to give you another responsibility. Not every member here can be a member of the presidential campaign council.”

Tinubu commended the NWC for its support and preparedness for the poll.

Onanuga, who featured on Channels’ Politics Today, yesterday, said there were sufficient records and blueprints initiated by Tinubu as a governor of Lagos that stood him out.

He said Tinubu’s meeting with the NWC was to solidify APC’s preparations for winning the election in 2023.

Speaking about the documentary on Tinubu, Onanuga said it was meant to show the transformational ideas of the candidate.

Onanuga said: “The documentary is to showcase to the people the man asking for votes for the next year’s presidential election on the platform of the APC. It is to show what he had done as a governor for eight years.

“He has a sterling track record of what he has done and that he is proud of and some of us who believe in him are proud of it too.

“When he was the governor of Lagos, he met the state in a mess and I knew how Lagos was in 1999. But when Tinubu came in, he changed so many things. He made the entire Lagos begin to work again.

“If you compare him with other contenders for the presidency, you’ll see that he’s miles and miles away from them.

“For instance, you cannot compare him with Atiku who has not been a governor, whose only record was a vice president to President Olusegun Obasanjo. For him (Atiku), his record was not impressive at all. If you ever read Obasanjo’s book, he gave a record of Atiku’s role in his government.

“If you talk about the other man, Peter Obi, who has been going around saying he wants to be president of Nigeria, his record too was not impressive. He was the governor of Anambra for two terms.

“He came, met the capital of the state as a village and left it as a village. He also left a lot of debt to the successive governments.”

Onanuga added that the documentary also showcases Tinubu as a good leader, who laid the foundation for the greater good of Lagos.

“Before Tinubu left office in 2007, he had already done everything on the Bus Rapid Transport (BRT). He had imported the buses. What he did not do was flag it off.

“When Babatunde Fashola came in, he inherited many of those projects, commissioning them.”

Onanuga dismissed Tunde Bank-Anthony’s opposition to some of the claims in the documentary, saying he was not part of the government in 1999.” Continue Reading