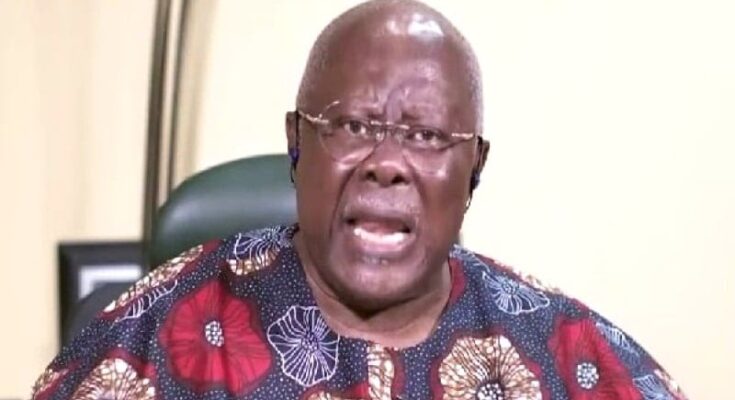 Tokunbo Pearse Calls For Expulsion Of Bode George From PDP

Pearse made this call at a news conference on Wednesday at the PDP secretariat in Lagos following George’s meeting with five governors led by Rivers Governor Nyesom Wike where they reiterated their demand that National Chairman Iyorchia Ayu should resign for a Southerner to succeed him since Atiku hails from the North.

The chieftain who is also the coordinator of the group Lagos State Support Groups for Atiku/Okowa Presidential Campaign accused the former Deputy National Chairman of anti-party activities adding that he is bent on creating crisis in Lagos PDP to destabilise the party ahead of the election.

He noted that members, including the ward chairmen, insisted that George who is the PDP leader in the state, leaves the party “for it to survive and win the election”.

“This is the voice of the people and these ward chairmen are the vehicle to the voices of our members.

“We are appealing to the party leadership to send a notice of expulsion of membership to Chief Olabode George”,

“Unarguably, Chief Bode George’s anti-party activities have become more obvious. A few days ago, precisely on Sunday, November 20, 2022, Chief Bode George at his Lugard Avenue residence, joined by his partners in crime, the G5 governors, declared that while he was open to supporting Lagos State senatorial, House of Representatives and State House of Assembly candidates, he was not prepared to support Excellency Atiku Abubakar for president nor would he support Jide Adediran for governor,” he added.

Previous PostEbonyi people will be rewarded for supporting me, APC: Tinubu Next PostI’ll set aside $10 billion for employment of youths, women if elected, Atiku says in Kwara