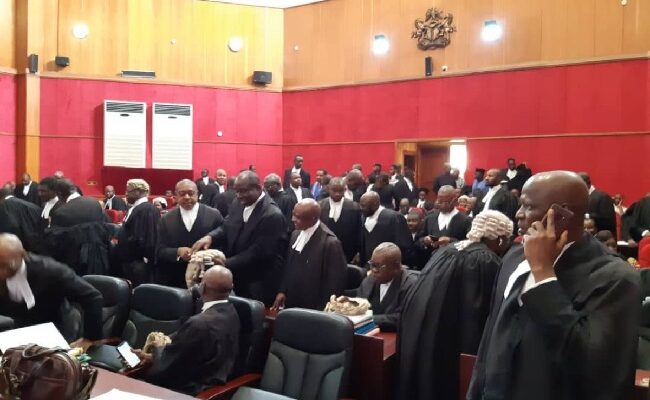 Tribunal adjourns for judgement in Oni’s petition against Oyebanji

The Election Petition Tribunal has adjourned judgment to a date to be communicated to parties on the petition by the governorship candidate of the Social Democratic Party (SDP) Chief Segun Oni against the victory of Biodun Oyebanji during the last June 18 poll in the state.

The Chairman of the three-member panel hearing the case, Justice Wilfred Kpochi, reserved judgment for a later date after all parties before the jury adopted their final written addresses at the sitting held inside a packed courtroom on Wednesday in Ado Ekiti, the state capital.

Counsel to the petitioner, Owoseni Ajayi in the written address submitted, told the tribunal that the third respondent, the Yobe State Governor, Mai Mala-Buni who signed the nomination form of Oyebanji and who also superintendent over the APC governorship primaries contravened section 183 of the 1999 Constitution by accepting to be the APC National Caretaker Chairman.

According to Ajayi, ” section 183 of the 1999 Constitution stated explicitly that a sitting governor shall not accept any other executive position while in office.”

Governor Oyebanji, his party, the All Progressives Congress (APC) and the Independent National Electoral Commission (INEC) urged the tribunal to dismiss the petition filed by the Social Democratic Party (SDP) governorship candidate.

Oyebanji maintained that Oni and his party, the SDP, have failed woefully to sufficiently discharge the burden of proof on them to convince the Tribunal that the election did not comply with the provisions of the Electoral Act and the Constitution of the Federal Republic of Nigeria 1999 as amended.

Oyebanji and Afuye (1st and 5th Respondents) through their counsel, Professor Kayode Olatoke SAN, told the Tribunal that their written address was dated 29th October and filed on 30th October and adopted same before the Tribunal as evidence that the election of his clients be affirmed.