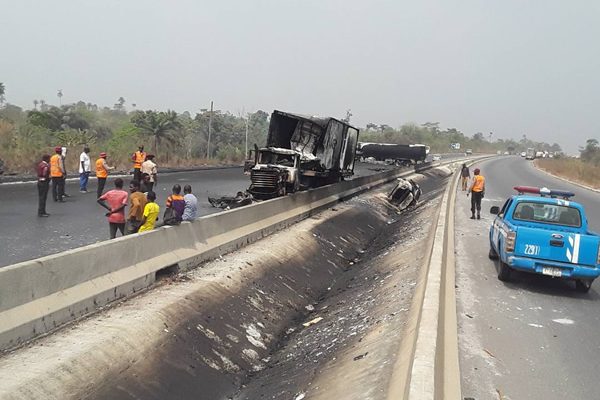 NNL reports that the brothers were returning from Alaba market with six 30-litre jerry cans of petrol when the accident happened.

A family source said, ”The two of them, of the same father, were burnt beyond recognition by fire as a result of petrol in their car.

“Unfortunately, two of them have pregnant wives,’’ a family source said.

Confirming the incident, Mr Sulaiman Taiwo, Unit Commander, Badagry Command of the Federal Road Safety Corps (FRSC), said that the two persons who survived are currently receiving treatment at a hospital in Badagry.

“The driver of the Nissan car manoeuvred it to the other side of the road and hit a pillar resulting in an explosion. The car was loaded with an unknown quantity of petrol.

“The two brothers were roasted in the inferno while FRSC’s operatives rescued the two injured occupants of the Mitsubishi who were taken to the General Hospital in Badagry for treatment,’’ he said.

Taiwo also told NNL that FRSC’s operatives had been deployed to the accident area to warn motorists to reduce speed as the area is particularly dangerous. Continue Reading