Home Politics What’s the use of a great body with redundant grey cells? —Carol King 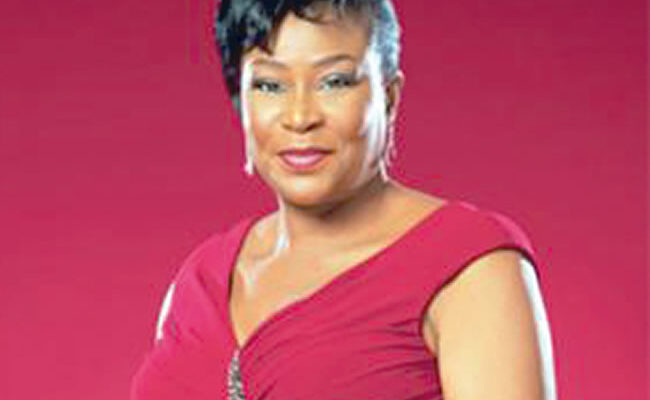 What’s the use of a great body with redundant grey cells? —Carol King

Caroline Eferamor King a.k.a CK1, popularly known as Carol King in the movie industry ia a versatile A-list actor with experience spanning different genres of theatrical endeavors; stage, film, radio etc. and has stood then text of time in the ever- changing movie industry. In this interview with YEJIDE GBENGA-OGUNDARE, she speaks on life as an actress, women and leadership and standing up to bullies among other issues.

Who is Carol King?

I am an actor with experience spanning the different genres of theatrical endeavors. I am the first of seven children born to the late Inspector Francis Ojo Adoghe and Mrs Dorcas Adoghe. I attended Ahmadu Bello university and Lagos state university where I bagged a diploma in insurance and B.A in Christian religious studies respectively. I am a mother of three and wife to a brilliant, amiable and supportive man Captain Kolawole King.

How is life as an actress?

Life as an actress has been great for me. I am doing what I love and passionate about. Not many people have that and I don’t take it for granted. The joy of being able to walk in people’s shoes by acting out their stories albeit for a moment is fulfilling. I can see myself doing it for all my existence on earth, God willing.

Can you compare being an actor in the last decade and now?

Being an actor in the last decade and now; it’s different in the sense that the industry has grown in leaps and bounds, scripting is a whole lot better, equipments as it pertains to photography, lighting, editing, the whole works is on a higher level, we now have collaborations with international actors and studios and the remunerations are better too although much is still to be desired. With the advent of online streaming platforms like Netflix, Showmax to mention just a few, it is more exciting doing the job in the now.

There’s a belief that actresses have bad marriages, what is your take on this ?

That is a total misconception. This probably stems from the fact that actresses by virtue of their work are out there, and people seem to think they know what’s going on in their lives and eat up everything they see or read on social media. Besides what are the parameters for arriving at such a conclusion. Can the same be said about bankers, lawyers, event organizers etc? I know of many of my colleagues who are in successful marriages and relationships.

How can women stand up to bullies in the society especially in the work place?

I think the question should be ‘how can anyone stand up to bullies in the society especially in the workplace’; I don’t think being a victim of bullying is gender based.  It’s a pity that we do not have anti bullying programs or structures in place to help victims. It cuts across all facets of one’s journey through life – primary, secondary, university, workplace, name it.

The bully wants to silence you and dominate you so my advice is to fight against it with all you can, speak out, point fingers at the offenders, and try as much as possible not to show your weaknesses because that is the biggest trigger for a bully.

How have you been able to stand your own as an actress to be the respectable actress you are known to be?

I will say first and foremost, it’s been the grace of God. I am blessed in that I only tell the stories that appeal to me and I am not forced into doing every job that comes my way because I need to make a living. I have a voice and I do not allow any mediocre reasoning. I bring my all into any job I am committed to and will not settle for half measures. My driving force is in the scripture Proverbs 22:29 which says “do you see a man who excels in his work? He will stand before kings; he will not stand before unknown men, ” this has been my testimony till date.

How can women prove their worth to be seen beyond cheer leaders and sex objects?

It’s sad that it’s assumed that women need to prove their worth in order not to be seen as cheerleaders and sex objects but what to do, we live in a patriarchal world but it’s worse in our neck of the woods. Women are born multitaskers, nurturers etc and in the grand scheme of things should actually rule the world.

We have had great women like the late Olufunmilayo Ransome-Kuti, Flora Nwapa, Dora Akunyili, and today, we have Ngozi Okonjo Iweala, Waris Dirie, Chimamanda Ngozi Adichie, Bolanle Austen Peters and my best friend, Yeni Anikulapo-Kuti to name just a few whose works speak for them rather than their physical attributes.

I have to add here though that the number of young women doing bbl surgeries nowadays is not helping matters. It kind of lends credence to this falsehood. I don’t have anything against enhancing one’s looks but when that is all you are about then it begs the question: What’s the use of a great body with redundant grey cells?

Can women be good leaders?

Of course YES!!! Women are born leaders and can be good leaders, we carry greatness!  Like I said earlier, women are natural multitaskers, nurturers, they have a high sense of justice and fairness, they are empathetic, they hold the home and family fabric together, they are great accountants, I could go on and on.

What is the role of mentorship and networking in the life of women?

Mentorship and networking in the lives of women is very important and I would like to see more of this. If we can as women rise beyond petty jealousies, envy and the like, it would really be great. Men seem to have perfected mentorship and networking, we should learn to do this. Empowering one another does not make any one of us lesser or mean that you will loose the spotlight. There are so many things we can achieve as a group.

How will you rate Nigeria on the 35% affirmative action?

It is a good step in the right direction that is if it is implemented. It is quite shameful and annoying when you look at the state of affairs in the country and the fact that we have to fight for relevance in governance when women are at the helm in civilized nations. I am glad to see women coming out to claim what is rightfully ours. At least, there is light at the end of the tunnel.

Previous PostPreserving African culture, traditional heritage our purpose —Ile Adúláwo Next PostEffects of too much protein