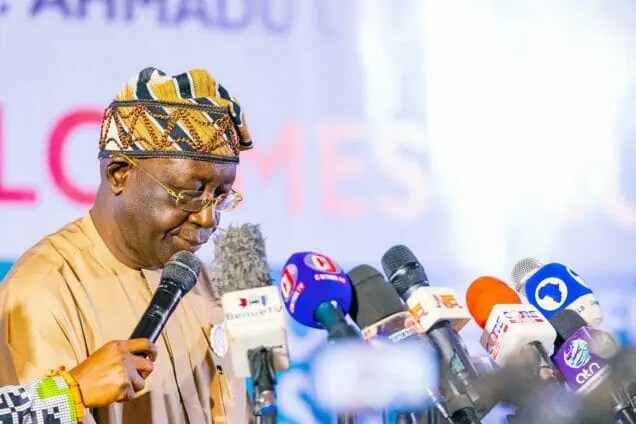 The National Chairman of the Peoples Democratic Party, Sen. Iyorchia Ayu, has disclosed that he is not bothered about the calls for his resignation, saying the proponents of such moves are youngsters who do not have a grasp of the goals of the party when it was formed.

Ayu said that PDP members and stakeholders elected him based on the laid down rules of the main opposition party.

In an interview with the BBC Hausa Service, the national chairman pointed out that even if there would be another election, those calling for his resignation would not be replacing him.

Nationnewslead reports that the camp of the Rivers State Governor, Nyesom Wike, has allegedly been calling for the resignation of Ayu as a condition to mend the fractured relationship between the governor and PDP’s presidential candidate, Atiku Abubakar.

The relationship between Atiku and Wike worsened a few months ago after the PDP presidential primary, which was won by the former Vice-President.

Wike became resentful after Atiku chose the Delta State Governor, Ifeanyi Okowa, as his running mate. Although the PDP set up a panel to reconcile the two men, Wike insisted on the removal of the party’s chairman.

Atiku had last week met with the governor in the United Kingdom as part of the reconciliation process.

But reacting during an interview with BBC Hausa, the national Chairman stated “I was voted as PDP Chairman for a four-year tenure and I’m yet to complete a year. Atiku’s victory doesn’t affect the Chairman’s position. I won my election based on our party’s constitution.

“I didn’t commit any offence; I’m only reforming the party so I’m not bothered with all the noises. I know I’m doing my work and I didn’t steal any money so I see no reason for all these talks. When we started PDP, these children were not around. They are children who do not know why we formed the party. We will not allow any individual to destabilize our party,” he said.

Weeks back, a news medium (not NNL) reported that the PDP national chairman has signed a resignation letter which was in the custody of a former President of the Senate and chieftain of the party, David Mark, but Ayu debunked the report. Continue Reading