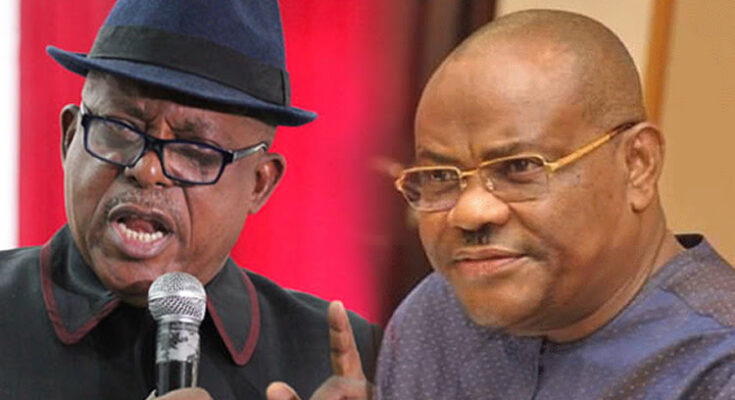 Rivers Governor Nyesom Wike has said the recent vote of confidence passed in the National Chairman of the Peoples Democratic Party (PDP), Iyorchia Ayu by members of the National Executive Council (NEC) of the party will not save him.

The Governor mocked the ousted National Chairman of the party, Prince Uche Secondus, for reportedly jubilating over the NEC’s decision and reminded him that a similar vote of confidence did not save him.

Wike insisted that the NEC’s position would not dissuade him and others from insisting that the prevailing structural imbalance within the party must be addressed.

The Governor spoke at the 11th Hour homecoming and reception organised on Saturday in Port Harcourt for defectors from various political parties, who recently joined the PDP in Rivers.

Wike said: “I was listening and watching, they said there is one man they call Secondus. They said he was dancing, celebrating that NEC gave their person vote of confidence.

“We don’t fight and go back. If you like you can have as many 20 votes of confidence, it’s not my business. My business is to make sure the right thing is done, and the right thing must be done. Whether today or tomorrow.”

Wike said despite the heightening political aligning and negotiations that were going on, his administration had not abandoned governance in the State.

The Governor explained that it was the love that he had for the State that has made him to remain devoted to providing good governance until the last day of his tenure.

He said: “I’m not going to play party with the interest of my people. Rivers State is paramount to me first before any other person or group.

“So, the eyes can see what we have done. Up till today, we have never abandoned governance. So many people are already rounding up, taking the last they have but yet, we are still committed in commissioning, and flagging off projects.

“Because of the love we have for our people, we will continue to serve you till May 29, when by the grace of God, Siminialaye Fubara will be inaugurated the governor of Rivers State.”

Wike commended the defectors for their courage to rejoin their political family saying there was no other political party that could win election in Rivers except the PDP.

He said: “PDP is a household name in Rivers State. Let me assure you that we will all work with you. Nothing like somebody who has been there since and somebody who has just come back. The more the merrier.

The Governor dismissed efforts by other political candidates as mere attempt to appear on the ballot because there was no hope of winning for them.

Wike said: “If God gives you the ticket of PDP in this State, go home and sew your cloth for the inauguration day.

“Remember, before I came on board, one state had our property with them. As I came in as governor, with support and prayer of our people we took all our property back.”

Wike said a new strategy would be adopted for the coming political season to replace “political big men” with people at the grassroots.

According to him, those who are domicile with their people will be utilised to deliver their units and wards during the general elections.

Rivers PDP Chairman of Amb. Desmond Akawor said the party was presenting a certificate to acknowledge excellent performance of governor Wike because he had surpassed their expectations.

Akawor said that the defectors from the other political parties had witnessed the unequal transformational performance of Wike in office.

He listed the establishment of the Nabo Graham Douglas campus of Nigerian Law School in the State, the Real Madrid Academy and Dr. Peter Odili Cancer and Cardiovascular Diseases Diagnostics and Treatment Centre among other reputable projects for the reasons why the defectors had returned to the PDP.

Speaking on behalf of defectors from Rivers South East Senatorial District, a former member of All Progressives Congress (APC) Board of Trustees, Dr. Sam Sam Jaja said they had a regrettable unsuccessful political expedition while in their former parties, but had retraced their steps back to the PDP on self volition.

Jaja described Wike as a compassionate, loving and graceful leader, who was created to do good for the people.

He pledged their 100 per cent loyalty and stated that they would join the PDP to uplift the oppressed, reengineer the new phase of transformation of the state and help the needy to grow.

On behalf of defectors from Rivers East Senatorial District, Princewill Dike said he was a sad man while he served as chief propagandist for the APC because the numerous developmental strides of Wike were too visible to be a lie. Continue Reading