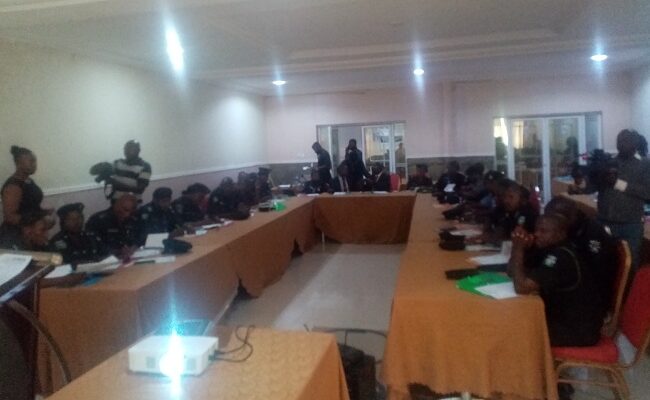 Ahead of the 2023 general elections, the International Federation of Women Lawyers (FIDA), Kaduna State branch has trained police and other security personnel on election violence against women.

Speaking at the occasion the country’s Vice president and National President of FIDA, Mrs Amina Agbaje remarked that the training was essential to prevent and respond to election violence perpetrated against women before, during, and after the 2023 election.

She recalled how some time ago, how election violence led to the death of a prominent politician in Kogi and the most recent one in Kaduna, saying it was for this reason that FIDA decided to train security personnel in four states of the country in order to curtail the violence perpetrated against women.

She stated the security personnel will be trained in Kwara, Borno, Plateau and Kaduna states.

According to her,  globally women share a common feature of marginalization and their participation in politics have continued to be minimal because most often they are afraid of coming out to exercise their civic responsibility.

“So this workshop is intended to strengthen the capacity of the law enforcement officers and institutions to encourage more participation of women by ensuring hitch-free violence before, during and after elections.

In his goodwill message, the state commissioner of Police, CP Yekini Adio Ayoku described the training as apt in view of the fact that women are always vulnerable to all sorts of intimidation and harassment.

Represented by SP Martin Danjuma noted that it was, for this reason, that majority of women are afraid to out during elections.

Also, speaking the Commander of the state Vigilante Service, Brigadier Gen, UM Ibrahim remarked that about 15,000 members of his organization will be engaged in the 2023 general elections.

Represented by Zailani Musa, PRO of the service he said his service is ready to abide the laws and support any move for a hitch free election including protecting the rights of women.