Home LOCAL NEWS You Lied, Most Of Us Yet To Receive January Salary, Nigerian Soldiers Blast Army Spokesperson 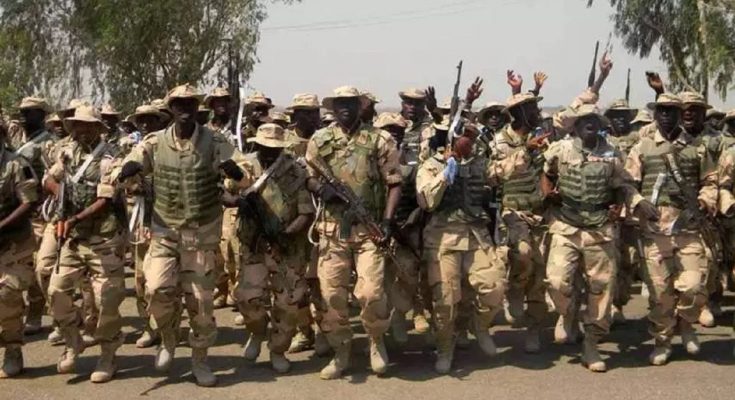 You Lied, Most Of Us Yet To Receive January Salary, Nigerian Soldiers Blast Army Spokesperson 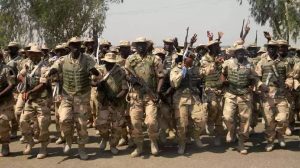 Some soldiers have lambasted the Nigerian Army spokesperson, Onyema Nwachukwu, for attacking Our correspondent over a story about non-payment of their salaries and allowances for January.

Nwachukwu in a statement on Friday described the story as misleading and inciting.

“The Nigerian Army has been notified of a publication by our correspondent alleging that personnel of the Nigerian Army lamented delay in payment of their January salary, with  many paid peanuts, while generals feed fat.

“This report is not only misleading, but a grandiose attempt to incite personnel against established precept of discipline in the NA.

“For avoidance of doubt, since the Chief of Army Staff, Lt Gen Faruk Yahaya, assumed command, he has prioritised the welfare of officers, soldiers and their families, including ensuring prompt payment of salaries, allowances and all statutory entitlements to personnel.

“Therefore, the allegation suggesting delay and non implementation of new salary increase is a reckless falsehood in all its intent and purposes.

“It is therefore instructive to state that for the month of January, all salaries and allowances have been paid. The attempt to stir up discontent and whip up sentiment with regards to the unsubstantiated and baseless report that generals feed fat is an outrageous frivolity. It is an attempt to incite personnel against the institution and cause disaffection in the ranks and should therefore be outrightly discountenanced.

“The NA wishes to call on  all credible media to distance themselves from the apparent unprofessional and disgraceful yellow journalism practiced  by some media channels and purveyors of fake of news. Our troops are in high spirit and would not be distracted by any mischievous submission by agent provocateurs,” the statement had read.

However, some soldiers and officers across different divisions insisted they were yet to get their January pay.

They described Nwachukwu as an embarrassment to the army.

“That’s our problem, how can he claimed we are not being owned. These generals don’t rate us at all. One thing I noticed is that salary payment has always been delayed since the new COAS was appointed. Those who have received salary in my division are not up to 6. Why denying the story? He is gradually becoming an embarrassment to the army,” a soldier serving in Borno told our correspondent.

Another soldier said the army was yet to pay him any money since this year began.

He said, “I’m yet to get a kobo from the army, I read the statement from the army spokesperson that they are not owning us and I laugh, is he even touching his salary? These are people that leave on bonus and allowances, so he can’t really know what we are passing through. How many of the Generals are in war front today? They sit down in Abuja yet not ready to pay those in different operations.”

A soldier had earlier told our correspondent that the least officer in the army earns N50, 000 which is about $120.

According to him, the low salary range is already very discouraging and even worse that the payment of such is being delayed.

He had said, “The army has not paid any soldier in all parts of Nigeria, January salary. There was an issue of increment of salary some years ago, but up until now, the least person in the Nigerian Army, earns N50, 000, that’s about $120 per month, that’s what the lowest-ranked soldier in the Nigerian Army earns.

Now, this small one they’re paying, to pay early so we can use it to do something for ourselves, is now a problem. People are complaining, everybody is angry over the salary issue.”