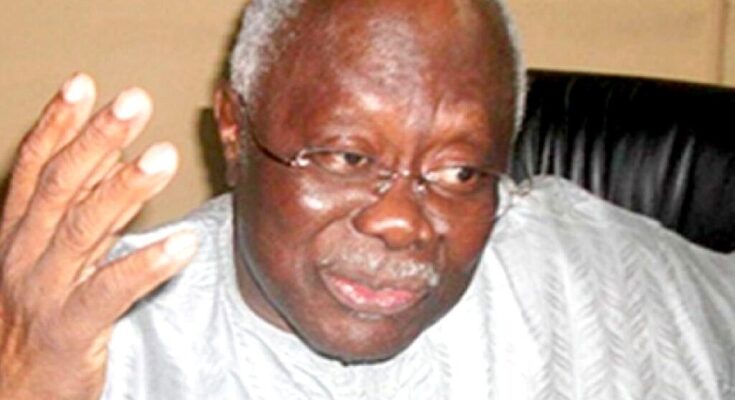 Bode George, a former deputy chairman (South-West) of the Peoples Democratic Party (PDP) has said come 2023 election, he will not vote for the party’s presidential candidate, Atiku Abubakar, unless the issue of inclusivity in the party is addressed.

George who is a prominent member of the G5 group led by Governor Nyesom Wike of Rivers State which has been at daggers drawn with the leadership of the party following their demands for the National Chairman, Iyorchia Ayu to step down, made his position known while featuring on an Arise TV programme, the Morning Show on Tuesday.

Reacting to a question on whether he will vote for his party’s candidate in 2023, he accused the northern region of dominating key positions in the party at the expense of other southern members adding that it must be shifted to the southern part of the country based on the principle of equity and fairness.

“Until this party returns to the founding fathers’ principles of unity, with equity, fairness and justice being the pedestal for any political decision taken in this party, and ensuring broad-mindedness to accommodate the concerns of all zones in this country, PDP becomes vulnerable to disaster in the 2023 elections,” he said.

“I will not vote for the presidential candidate of our party. Until the issue of inclusivity is addressed. Let them sit down, and think over it. It is not negotiable; every Nigerian is important for this election.”

“The South-West has never enjoyed this position since the party started almost 25 years ago. What is our crime? If you are telling us you want to rule this country, you have to weave all the tribes and all the people together. That is the major problem, and unless that is resolved, I will not vote for our own candidate.”