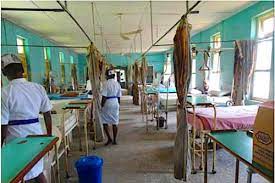 The families of four newborn babies have been thrown into mourning after they died due to alleged negligence on the part of the doctor on duty at the Sapele Central Hospital, in the Sapele Local Government Area of Delta State.

The victims’ families, while lamenting over their deaths, alleged that the doctor on duty was drunk, adding that there was no power supply in the hospital.

Angered by the development, patients, relatives and visitors at the hospital reportedly staged a protest as they slammed the management of the medical facility over the victims’ deaths.

A relative to one of the bereaved mothers, Benjamin Ikeji, said all the women due for delivery lost their babies in a single night.

He said, “When we brought my sister to this hospital, the doctor told us that it was not yet time for her delivery and I and my sister’s husband waited till 10pm.

“At midnight my sister said the baby was stuck and the nurses couldn’t do anything because the doctor was not around.

“In the morning, I met the doctor who said there was nothing he could do since they had no light. I bought fuel for them that night before I left and the next thing I heard was that my sister lost the baby.”

Another victim, Newton Oroba, while mourning over the death of his newborn, said his wife had been traumatized over the incident.

He said, “The doctor on duty was drunk. We came to the hospital around 9pm and left. Only to come back in the morning, my wife said she lost her newborn”

Some patients and relatives of the deceased victims, upon sighting the doctor, reportedly confronted him to demand an explanation for his absence while on duty.

The state Commissioner for Health, Dr. Mordi Ononye, did not respond to calls and a text message sent to his phone number as of the time of filing this report. Continue Reading