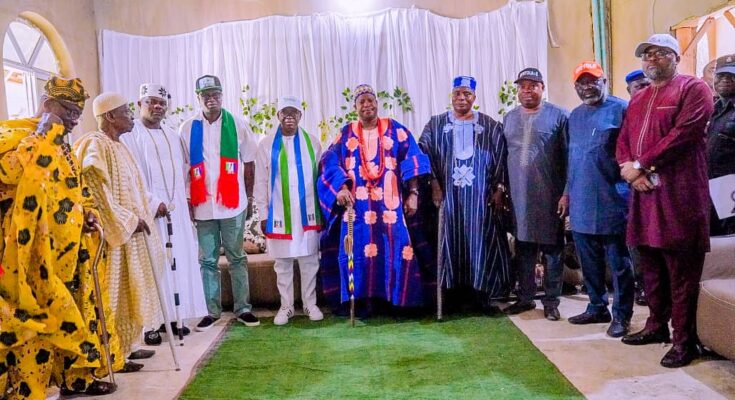 …as Oyetola receives over 150 defectors in Boluwaduro LGA As the campaign train of Governor Adegboyega Oyetola, the candidate of the All Progressives Congress, APC, in the forthcoming governorship election in Osun, moved to Boluwaduro Local Government Area, the traditional rulers in the Council, have reaffirmed their unflinching support for the Governor, saying they would do all within their powers to get him re-elected. The traditional rulers led by the Owa of Otan-Ayegbaju , Oba Lukman Fadipe and the Oluresi of Iresi, Oba Sikiru Adeseun, said the modest achievements of the Governor had earned him second term, insisting that any attempt for the State to decide otherwise would be suicidal to the future of Osun. This is even as the Governor maintained that his campaign strategy would continue to be issue based and development driven so as to consolidate on the gains recorded so far and set the State to the path of socioeconomic rejuvenation. Speaking in his palace where other traditional rulers across the Council assembled, Owa of Otan-Ayegbaju, Oba Lukman Fadipe, said the indelible imprints of the Governor would speak for his re-election as, according to him, the governor has performed creditably well to transform the State.

Oba Fadipe who described the administration of Governor Oyetola as unprecedented, said he has been tested and trusted and is therefore qualified for a second term so that he can take the State to enviable heights. He said: “Please continue with your good works. We are satisfied with what God has made you to do within three and a half years. You have convinced us beyond reasonable doubt and done so much beyond expectations. “Your style of governance is unique. You have been running an all-inclusive and people-oriented governance.

“You are a calm, cool, collected and calculative man who has been silently achieving great things and squeezing water out of solid rocks.

“We know what is accruable to the State in terms of resources but despite this obvious reality, your government has not disappointed us or left anyone in doubt of your capacity to achieve great with little. “You have proved that it is only an empty barrel that makes noise. Your campaign slogan is speaking for you already. That is why your achievement knows no bounds.

“As traditional rulers, we are good assessors. We have assessed your achievements and we are satisfied with all you have done. “We have seen integrity personified in you. We have seen Omoluabi ethos par excellence in you, and your calmness and integrity have endeared you to many.

“I am appealing to you all to support him wholeheartedly because he deserves to be re-elected”.

Corroborating, the Oluresi of Iresi, Oba Sikiru Adeseun, lauded the Governor for being faithful to his electoral promises made to the people of the State, saying he has justified the people’s mandate.

Oba Adeseun said the good works of the Governor are clear testimonies to the fact that the Governor merits second term, noting that seeking an alternative to him is suicidal to the future of the State. “You have demonstrated good intentions in all you do, and you have been tested, trusted and you are worthy of re-election for second term. Just ride on, we have confidence in you and firm belief that you will win and get re-elected. To us, you have done excellently well, and as traditional rulers, what you have done particularly for traditional rulers in Osun, no one or no Governor has done it in the history of this State.

“Your achievement has surpassed what we have experienced in the past. We don’t know where you have been getting money to run the affairs of the State. You have proved to us that you are a financial wizard and an economy expert. You have done beyond expectations. We will do all within our power to get you returned. “Though we are expected to be apolitical, in actual sense, we are all political animals. You are our choice and choice of the people of Osun. An alternative to you is suicidal to the future of our great State“, the monarch added.

Addressing the mammoth crowd of the party loyalists at the St. Thomas, Otan-Ayegbaju, the campaign venue, Governor Oyetola promised to consolidate his modest achievements and improve on them in his second term. He warned members of the opposition parties to be cautious, saying campaign and election are not about violence.

Governor Oyetola who expressed surprise at the attack on the members of the press and loyalists of the party shortly after his campaign at Gbongan yesterday, said it was unfortunate that the opposition had resulted to violence. He appealed to the members of the party not to panic just as he called on the security operatives to go after the perpetrators and bring them to justice.

“I am surprised at the attack that occurred shortly after I left the venue of the campaign yesterday. I am appealing to the people to remain calm and unperturbed as we are doing everything possible to maintain peace and order. “We have charged the security agencies to go after the perpetrators. Osun is known for peace and we will continue to maintain that status no matter what. Violence will not help any one or take anyone anywhere. I have been tested and trusted. We are sure of victory, and in a free and fair contest, I will win by the grace of God”, Oyetola added.

Speaking on behalf of the defectors, Mr. Kolawole Akinboladun, said the modest achievements of Governor Oyetola were the reasons for the defection from PDP to APC. He said the defectors are notable personalities across the nooks and crannies of Boluwaduro Local Government m and that they are ready to do everything to re-elect Governor Oyetola for second term.

Akinboladun who is from Ward 4 in Boluwaduro Local Government Area said no effort would be spared to campaign massively for the Governor in their respective domains. Earlier, the Director General, Oyetola Campaign Council, Senator Ajibola Basiru urged the people of the State to vote massively for Governor Oyetola saying the task of governance could not be left in the hands of a breastfeeding toddler. “It is wrong for anyone to leave Osun governance in the hands of a breastfeeding child. Governor Oyetola has within three and a half years of his administration built a solid foundation, set Osun on the path of socioeconomic and infrastructural development and made indelible imprints and legacies that are too big for a toddler to consolidate”, he added. Continue Reading