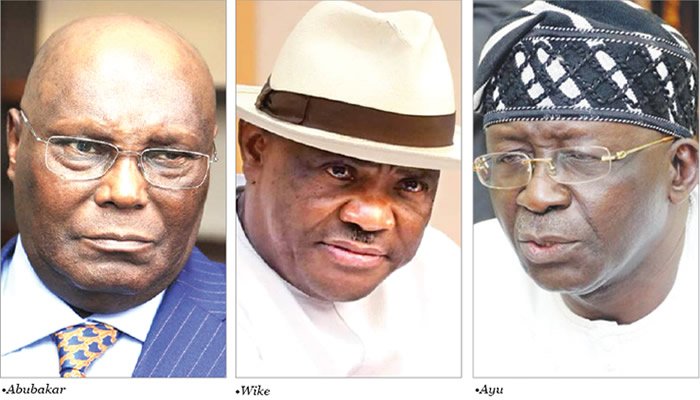 Governors elected on the platform of the party seemed to have drawn the battle line by showing where they belong in the face-off between the PDP presidential candidate Alhaji  Atiku Abubakar and Rivers State Governor Nyesom Wike.

It was unclear yesterday whether Ortom, who is currently in the United States of America, remains in Wike’s camp or he is on Atiku’s side.

Although Edo Governor Godwin Obaseki was represented at the Caucus Meeting on Wednesday by his deputy, Comrade Philip Shaibu, there was no representation for him at the NEC session.

A top source told The Nation yesterday that the NEC meeting “revealed the depth of the crisis in the party.”

The source said: “While Atiku could boast of six governors, five others are with Wike including Ortom who was said to be ‘floating’ last night.

The source described Governors Obaseki and Udom as the ‘tie breakers’ in the party.

The top leader said: “Despite the concessions made by Atiku’s group, Wike’s camp has remained adamant on Ayu’s exit and the NEC meeting on Thursday foreclosed reconciliation.

“Our governors are now in four camps. Some are for Ayu, others for Wike, the so-called neutral group and some on a spying mission.

“To preserve the unity of the party, Senator Walid Jubril, who had three months left in office, was asked to step aside as the chairman of PDP’s Board of Trustees (BOT).

“To sack Ayu was an impossible task because the founders of PDP have stood by him. They believe that Wike as an individual is not greater than the party,

“These leaders also do not joke with party discipline. Most of them were angry that Wike was riding the party roughshod.”

Asked of the next step, the source, who has been privy to all negotiations, said: “Atiku will proceed with his reconciliation agenda and campaign.

“We are confident that more governors will back Atiku because it is about PDP returning to power.”

A source in Wike’s camp said: “Go and check your facts; the governors with Atiku are not up to six. You will see what will happen soon.

“We have rejected the so-called concession of the post of the BOT chairman to the South. This is not substantial.”

Pressed to expatiate, the source said: “Wike’s camp may reject campaign directorate offers from Atiku unless Ayu is removed.

“The camp may not contribute to Atiku’s campaign and it may also engage in minimum participation at all levels.

“We will protect the party’s interest to retain power in 2023 in our various states. It is good luck to those who do not want equity.

“We will certainly not disclose all our options until we get to a safe bend.”

NWC to meet Wike next week

Embattled National Chairman of the party, Dr. Iyorchia Ayu, is not losing hope of reconciliation ahead of next year’s polls.

He said yesterday that the PDP NWC would be meeting next week with Governor Wike and other aggrieved members of the party.

Ayu broke the news of the planned meeting to the acting chairman of the PDP Board of Trustees (BoT), Senator Adolphus Wabara.

“I want to also reveal to you that the NWC under the leadership of the Deputy National Chairman, Amb. Iliya Damagun, will be going to see not only Governor Wike but every other person who is aggrieved,” Ayu’s Special Adviser on Media and Communications, Simon Imobo-Tswam, was quoted him as saying.

He added: “It is the unanimous decision of the NWC and we think that your leading the fight for peace and full reconciliation in the party will be helpful,”

The mission to Port Harcourt will be led by the PDP Deputy National Chairman (North) Iliya Damagun, he said.

“There is a time for anger and there’s a time for the anger to stop. So help us to reach out to all aggrieved members and try and heal the party with your new role as the party Chairman of the BoT.”

I stand with Wike, says Fayose

A former Ekiti State Governor, Ayo Fayose, declared yesterday that he was standing by Governor Wike in his fight for justice, equity and fairness in the PDP.

Fayose said those asking the PDP’s Presidential Candidate, Alhaji Atiku Abubakar, to call the bluff of Wike and his group are the real enemies of the party.

The former governor also said those hanging around Atiku should allow him to win the forthcoming election.

Fayose, who spoke while inaugurating Community Secondary School, Obuama, Harry’s Town in Degema Local Government Area of Rivers State, built by Wike, told Atiku that it was not too late to make amends and bring everybody together to win the election.

He said the Wike group would meet in due course and take a decision on the way forward. He described the Rivers governor as the soul and lifeline of the party.

Addressing Wike, he said: “Whatever anybody says about you, posterity will be on your side. It is a matter of time. When I was a governor of Ekiti, I honoured people when they were alive not when they were dead. You have honoured yourself by your handiwork.

“Forget whatever anybody says about you. I said it before Wike, a man with a fierce look but with a good heart, a heart of will to accomplish, to love and to support. Majority of your enemies today are not against you because of anything. They are against you because they know you have capacity.

“There is no living being in this party or outside that will not acknowledge your contributions to this party. You are the soul of this party. Even till now what you do, how many people do it?

“There was a time in this party when I was a sitting governor; I was a nightmare to the APC and the Buhari government. That time when you woke up, you would see Fayose. But today when you open television, you will see Wike. As your senior brother, I was a lion that time. Your good works will never go unrewarded.

“The people that had benefitted from you are the people that want to pull you down. When sitting governors were defecting, we stood the test of time. We never for one day looked at the eyes of the APC. The good man in the history of the Bible is always the enemy of the people who don’t like the truth. Continue to do your best. Don’t give up”.

Fayose expressed optimism that the party would do the needful and bring everybody together, insisting that the ultimate objective should be to win the next election

He recalled their encounter with Atiku when he visited Wike after winning the party’s ticket, saying he advised him on fairness and inclusiveness.

Fayose said: “I believe this party will come together. I believe the needful will be done because winning an election is all that matters. Wike hasn’t come out to say Atiku Abubakar is not the presidential candidate. He is.

“I was there the day after the election when our candidate visited the residence of Wike. We had mutual conversation. We were all happy and everything was in place to move forward. I spoke at that meeting. We don’t want to aggravate the situation. I am only appealing to people that matter. In every political party there will be groupings, same family with different interests.

“We can do better than we are doing. People around the corridor of power allow this candidate to win election. They say Fayose is now Tinubu’s man. When people were defecting, I never did. Losing Ekiti election, if I go into that now you will know the source. But it is not important because we must put things behind us and move forward.

“Some people believe that they have to destroy their leader before they can rise. If you are destroying any leader, you can’t rise. Wike is not a saint, neither am I one. Don’t expect perfection from me. We will not want to come to Rivers here and tell Wike what he wants to hear. We will speak our mind.

“I remember I say something the day the candidate visited Governor Wike. I told him the knife is in your hand, the yam is in your hand. Cut it in a way that it will be edible. It is still not late. We can still achieve cohesion. We can still stay together and win this election. Use the knife to cut the yam and make it edible.

“Don’t let people come to you and tell you that ‘these do not matter, leave them with their local politics’. You are the man that wants to lead us. God will give you wisdom to rally everybody. My own son is a candidate in the party. He is a PDP candidate. Do I wish my son to fail? No. George Fayose is my son. With the last drop of my blood, I will stand by him.

“I came out to say it is the turn of the south; that is the position of that group at the time. I want to say to you that everybody has a way to ventilate their anger. It is not enough to allow people who do not have substance to come and destroy the party that God has given you as a candidate.

“Wike is not saying he is the vice-presidential candidate and he is not looking for it. It is important that winning this election is the ultimate. Let us win together. I believe in due course, this group will meet and all their intention is let us win together.

Fayose who hailed Wike for his generosity called on the leaders of the PDP to do more to unify the party.

“You have been the lifeline of this party and anybody wishing you away is an enemy of this party. I appeal to Atiku and those in the corridor of power, let us do more to unify the party. I am with Wike. Wike is in PDP, I am in PDP.”

Earlier, Wike, who for the first time since he commenced the commissioning and inauguration refused to speak on the PDP crisis, said the deplorable condition of the school was brought to his attention by his Deputy Governor.

He asked the Commissioner for Special Duties to design hostels and dining halls for the students of the school.

Wike said his administration in the past two weeks had been showcasing its strides in the educational sector, adding that the government would soon begin to show its achievements in the health sector.

He said: “If you look at the pictures, the school was in a terrible situation. We have been able to put in our best to make it a proper secondary school that our children will not only have access to education but will also have quality education.” Continue Reading