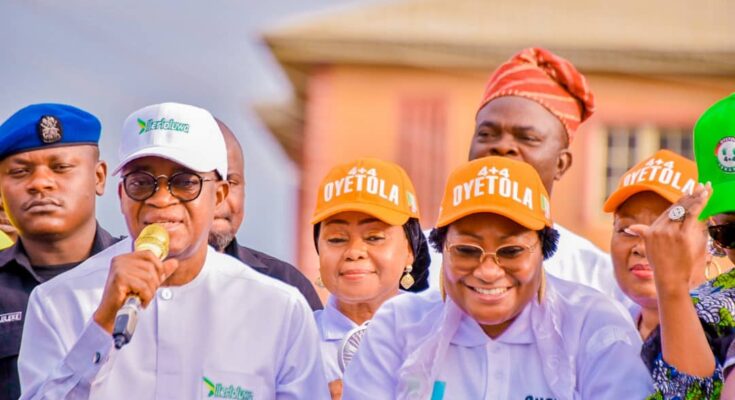 …’Our modest achievements have shown our depth in progressive ideology’ – Oyetola Monarchs and citizens across towns, communities and villages in Ayedaade local government, have commended Osun Governor, Adegboyega Oyetola, for being a promise keeper and an outstanding performer, assuring him that his reelection is guaranteed.

This is as Oyetola continued his re-election campaign in Ode-Omu, Orile-Owu and Gbongan on Monday, following the flag off in Ife last Thursday. Olufi of Gbongan, Oba Adetoyese Oyeniyi, commended the governor for his impressive record in less than four years, adding that “your reelection is our collective project here in Gbongan”.

Oba Oyeniyi said it was necessary for Governor Oyetola to return to consolidate on the good works he had done since assuming office in November 2018. “I say it everywhere I have the opportunity to speak that you have done so much, and I’m grateful to God for helping you this far. It is a must that you consolidate the good works you’ve done, and that is why another four years is necessary.

“We know your desire to govern Osun is not for selfish gains or interest and that is why your reelection is our collective project here in Gbongan”, Oba Oyeniyi said. The Alayegun of Ode Omu, Oba James Bolanrinwa Alabi Oladipupo, on his part, described Governor Oyetola as a fulfilment of God’s promise to Osun, adding that his performance in three-and-a-half years showed that he was raised to fix Osun.

According to him: “God made a promise to Osun and fulfilled it with the emergence of Governor Adegboyega Oyetola. Those who are observant will know that there have been tremendous and significant changes in Osun since he became governor, and he will do even better if trusted with the mandate again. “I appeal to you all not to work against the fulfilment of God’s promise. Rather, let us join hands with the man who has been ordained for this great task. I believe that come July 16, he will emerge victorious”, Alayegun said.

The President of Ode-Omu Descendant Association and a retired civil servant of the state, Akin Olaniyi, who described Oyetola as a “private sector administrator and financial wizard”, lauded him specifically for looking into the plight of workers in the state, among other things. He expressed optimism on the success of the campaign and election, saying that “your outstanding performances across the state have gone ahead of you”.

In Orile-Owu, the Olowu of Orile-Owu, Oba Daud Ajolola Akinfalabi, also pledged the readiness of the Owu community to support Oyetola’s reelection on the strength of his performance. Oba Akinfalabi who commended the governor for running a clearly defined, participatory and an all-inclusive government, registered his community’s confidence in Oyetola’s ability to consolidate on the works he had done in his first term.

While addressing a mammoth crowd at the campaign venues, Governor Adegboyega Oyetola said his performance in the last three-and-a-half years is proof of his depth in progressive ideology. Oyetola, who reiterated that he is in government to serve, called on citizens to support his drive and aspiration to collectively fix Osun.

“You handed me the mandate as your governor four years ago, and through the help of God, I did not disappoint you. I trust that you are not going to deviate this time around. “Our works have shown that we are not neophyte in politics. In 1983, I had the privilege of sitting and interacting with Baba Awolowo, and that attests to the fact that I understand the concept of progressive governance. We are not in government to struggle for relevance, we came to serve, we came to fix Osun.

“We have taken note of other concerns, and we will attend to all in due time. But we must also remind you that this is an effort that requires collaboration. That is why we are appealing for your support, before, during and after the election, to enable us fix the state. “Osun is at a very delicate phase in history, let us entrust its leadership to hands that have been tested, not gamblers or jesters, or those who think Osun is for sale”, Oyetola said.

Earlier, the Director-General of the Campaign Council and Senate spokesperson, Senator Ajibola Basiru, appealed to citizens to turn out in large numbers to cast their votes for Oyetola, who he described as a worthy candidate.

Basiru said the financial situation in Osun requires serious engineering, and Oyetola has shown capacity to creatively manage the lean purse of the state without further plunging it into liabilities. “Let us all come out in our large numbers to vote, but let us also not be tired of propagating the good works of Governor Oyetola. Whoever must be governor must know his right from his left. Politics in Osun has gone beyond promoting mediocrity. No one can paddle the boat of Osun like Oyetola. The financial situation requires so much calculation, and Oyetola is that calculated leader we need”, Basiru said. Continue Reading