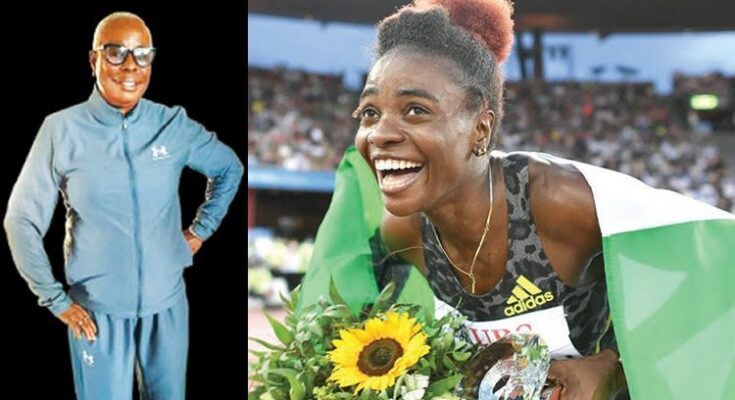 Amusan sent the social media into meltdown after she broke the women’s 100m hurdles record at the 2022 World Championships in Oregon, US with a stunning semi-final time of 12.12secs to erase Kendra Harrison’s 2016 effort by 0.08secs. She ran faster in the final, but her 12.06secs was ruled ineligible by an illegal tailwind.

She continued her impressive 2022 season at the just-concluded Commonwealth Games in Birmingham with another gold medal.

She clocked a blistering 12.30s to smash the Games’ record on Sunday morning at the Alexander Stadium in Birmingham.

The athlete, who hails from Ijebu-Ode, also inspired the Nigeria relay team to their first-ever gold medal in the women’s 4×100 at the Commonwealth Games.

Amid reports in the media quoting a coach, who claimed to have discovered the 25-year-old athlete, the 68-year-old Ogunde, then a staff of the Ogun State Sports Council, said she discovered Amusan when she was posted to Ijebu Ode in 2005.

“I saw several reports that Tobi was discovered by someone else, but I want to make it clear that I was the one who discovered her,” Ogunde told NNL correspondent.

“In 2004 I was transferred to Ijebu Ode sports council from the headquarters in Abeokuta. I was mandated to cover all areas, including the rural and the urban areas, and I visit almost all the schools back then.

“In the course of moving around, I discovered so many talents and Tobi was one of them. I also discovered Omotola Kuku and the mentor of Tobi herself, Biola Onakoya, who was a 400m runner and so many others.

“No doubt, one person cannot train a child, but I was the one who noticed that Amusan had what it took to become a future champion.

“She was a student of Our Ladies of Apostle in Ijebu Ode and the Games Master then was Adeyemi, though I cannot remember his other name and Dr Adetoye Alatise was the Chairman of Ijebu Ode Local Government Area, though he is now the Oba of Ososa Ijebu, he supported our course for the development of young talents.

“We had an U-15 athletics competition in Ogun State and my team won it for two consecutive times before being dethroned by Ilaro and Tobi was part of my success story.”

Ogunde added, “I was the head athletics coach in Ijebu Ode back then, and I had so many responsibilities and people around me. We do have trials, inter-house sports and so many other events and I had to hand over the supervision to one of the trainers known as Charlie Baba. He was an apprentice under Ayodele Solaja back then.

“He was the one that suggested that we merged them all with the athletes under Solaja and Tobi was very good in 100m, 200m, high jump and long jump. The truth is whoever is good in all these fields can easily cope with participating in 100m hurdles, as we saw with Chioma Ajunwa.

“The mentorship has been there before she even met Solaja, but he continued with their development.” Continue Reading