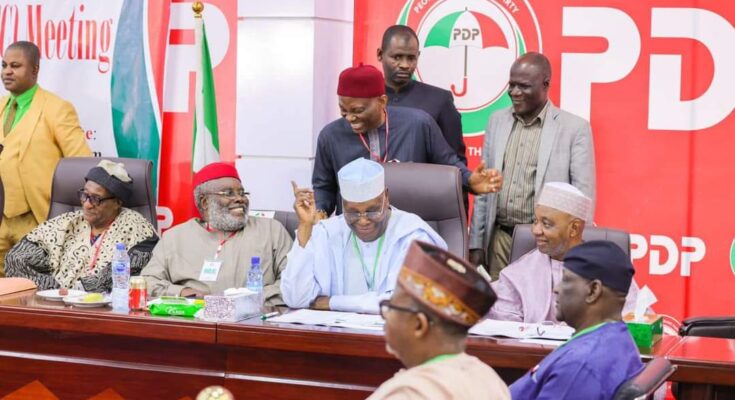 The presidential candidate of the Peoples Democratic Party (PDP), Abubakar Atiku has expressed confidence towards the 2023 presidential election, saying it is time for the opposition party to power.

Atiku made this assertion while speaking during his meeting with the stakeholders of the party in South-West in Ibadan on Wednesday.

The PDP flag bearer, who posted a video of the meeting via his verified Twitter handle on Thursday could be heard sayng, “It is doable, it is achievable. We can do it. We have the capacity to do it. We have done it before. It is time for us to return PDP back to power.

In a tweet that accomanied the video, Atiku stated, “My takeaway from the South-West

@OfficialPDPNig stakeholders meeting in Ibadan is that our party’s unity is reinvigorated. As ONE, we shall get it done! -AA”

The meeting, it was learnt, was intended to discuss the future of the party ahead of the 2023 general elections.

Atiku, in company of his running mate, Dr. Ifeanyi Okowa, was received by Governor Seyi Makinde of Oyo State at the Oyo State Government House, Agodi.

Speaking at the meeting, Tambuwal said PDP will take over the six states of the South-West in the 2023 elections.

He noted that the victory of the party in Osun State was a prelude to PDP’s bid to take over the entire South-West region.

Tambuwal said, “What happened in Osun State recently is a sign of what is to come. The South-West is going to be delivered to the PDP come 2023.”

The National Chairman of the party, Senator Iyorchia Ayu, who was represented by Ambassador Umar Damagun, assured that PDP has nothing to worry about  in the coming polls while urging members to vote for the PDP members. Continue Reading