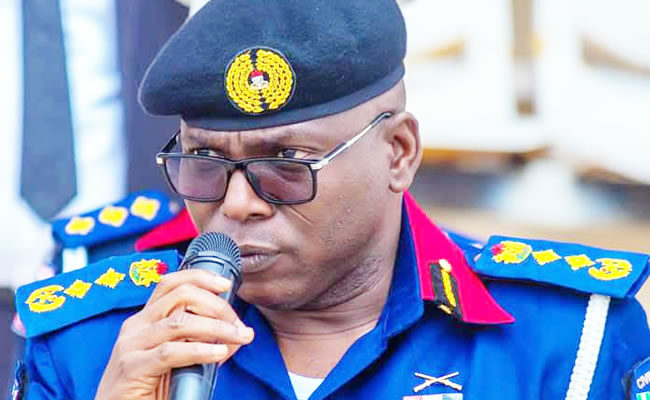 The Commandant General of Nigeria Security and Civil Defence Corps(NSCDC), Dr Ahmed Abubakar Audi has ordered massive deployment of personnel to workshops and public places to ensure the hitch-free celebration of Christmas and New Year.

Audi ordered zonal commanders and state commandants of the corps to deploy personnel massively to ensure security during the yuletide.

Director of Public Relations, NSCDC, Mr Olusola Odumosu in a statement on Friday in Abuja, said the Commandant General gave the order while speaking with senior officers ahead of the festive period.

He charged the zonal commanders and state commandants to smoke criminals out of their various hideouts and ensure the safety of lives and protection of public assets and infrastructures in their respective domains.

He declared that end-of-the-year activities in the country will be peaceful and orderly because there will be no room for mischieve makers to operate.

The CG tasked state commands down to all divisional offices in every Local Government Area in the country to deploy effective operation teams for constant patrol of every nook and cranny, black spot and flash point during this critical period that crime is most prevalent.

He also charged them to develop and deploy a very strong and purposeful intelligence network around essential and critical national assets and infrastructure to eliminate significant vulnerabilities during the yuletide.

He said: “It is time for extra work and we are leaving no stone unturned in ensuring that Nigerians and friends alike enjoy the yuletide season.

“Security of our people is very sacrosanct, therefore, all hands must be fully on deck, that is why I have ordered massive deployment of our personnel all over the country to ensure adequate security, enforcement of order and implementation of citizen’s rights.

“We have made proper preparations and due to the dynamics of crime, a unique security template will be adopted to identify and prevent any attempt to disrupt the peace of the nation,” he said.

He tasked officers and men to remain committed to enforcing the law and checkmating anyone causing a breach of the peace or threatening public safety across the country particularly in churches, mosques and other places of major public convergence during the celebrations.

“We are going to deploy additional plainclothes and uniformed officers on the field and in public places to patrol and help prevent and address criminality that may arise in the course of the celebrations.

“About 85 per cent of our entire workforce shall be deployed to public places, worship centres and other areas of the congregation such as amusement parks, gardens, shopping malls, markets, motor parks, train stations including airports and seaports.”

He assured that the corps would be on full alert and unrelenting in its conduct of anti-criminality operations and charged state commandants to heighten security by fully engaging all specialised units of the corps for full-scale security coverage of the citizens.

He reiterated the importance of synergy and collaboration for effective security operations and charged corps personnel to work effectively and cooperatively with sister agencies for maximum results.

He congratulated all Christian adherents for the coming celebration of the birth of Christ and urged them to use the period for solemn celebrations and more prayers for the country.

He called on citizens and residents for all-around vigilance, security consciousness and prompt reporting of suspicious movement or activities to security agencies during this period for immediate action to nip crime in the bud.